Caring for loved ones who are dying is always difficult. When that loved one is a decorated war veteran as well as your father, there is a unique layer of protocol that demands you assume a mantle of duty, respect and honor on behalf of that loved one. As a military brat, I was raised in a culture that gave me a unique set of survival skills that proved useful when called up be a care partner for my dad's terminal diagnosis.

My father’s words slapped me across the face. He was sick. Really sick. He had lost over 30 pounds in as many days and we did not know what was going on. Knowing my father would not seek help on his own, I asked to assume his Medical Power of Attorney and at least start the process of getting a medical diagnosis. Being the ever-prepared Retired Lieutenant Colonel Air Force Airman that he was, all the necessary paperwork was already in place for the day when we would need to take action. Now that the day was here, my father was reluctant for me to take on this last responsibility of being his care partner.

Any child who takes on the role of caring for a dying parent understands the transition is uncomfortable for everyone involved. For my father, this was especially hard. I was his youngest child; his baby girl. Much to both our sorrow, I had recently become the only other surviving member of our family. My elder sister had died just 18 months earlier, followed closely by my mother (the love of his life) 3 months later. It was just me and him. We would have to navigate this last, unbearable journey together and I would be his sole care partner.

Military families are resourceful and take care of their own. We were a tiny team and who counted on each other to deal with adversity typically without extended family nearby. Still, his words were a sucker punch; “I am dying.”.

EXCELLENCE IN ALL WE DO.

These are the core values my Air Force military brat upbringing infused in me.

Fortunately, dad had written out his definition of life so that neither medical people nor I could not define it for him. His wishes were succinct and clear, but honestly, I wanted something different. I wanted more time with him. He wanted to die on his terms and to start his next adventure with my mom. We wanted entirely different things, yet I knew I had to do my absolute best to respect his wishes.

Adaptability is a blessing especially when time is short. My father permitted me to become his care partner AND remain his daughter. I became his advocate, manager and ally.  It is no exaggeration to say that end-of-life caregiving, like raising children, is one of the most important actions you can do and you will not get a do-over. No one becomes a care partner with the knowledge or skills we need. We all learn to fly in a storm.

My father was diagnosed with non-Hodgkin’s lymphoma directly related to his high exposure to Agent Orange while serving 900 missions in the Vietnam War. There’s a lot of paperwork and people to manage with a terminal diagnosis;  when there is a military family you are responsible to, there are many additional protocols to take action on. 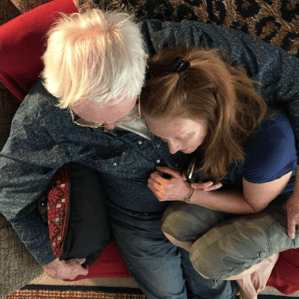 For an intense 3 months I managed my father’s illness, hospitalization, at-home care and his death to the best of my abilities. This final action as his baby girl is one of the most difficult things I have ever been called on to do in my life.   My father said that my actions made the difference that brought comfort, peace, pride and dignity in his death. I am so very grateful that he told me so.

This is one reason I work with Caregiven. I aim to make this process better for all families, for all who show up and make a difference;  including military care partners and their unique set of responsibilities.

The following is a “guest blog” – written with much love and passion by the amazing Rachel of ...

Care Partners are Different Than Caregivers

As a child I was taught that “sticks and stones may break my bones but words will never hurt me.” ...

How to Become a Care Partner

“Who are you?” said the Caterpillar…